It takes nearly two months to develop an effective mobile app. However, if the app is complex, it will take a longer duration to build it as the project may require several team members to work in collaboration. Presently, it has become imperative to have a mobile app and according to a study mobile apps are expected to hit a huge $188.9 billion in revenue by the end of 2020.

A large number of users prefer mobile over other gadgets and therefore mobile apps have been driving internet traffic all across the globe now. This is the reason why any business functioning in India strives to obtain its own mobile app. Several factors play an important role in the cost of developing a mobile app. All these factors together will decide the final price that you may have to pay in the end.

It is worth mentioning that the price for developing your app in India is far less than what it may cost abroad. Rough estimates suggest that it is about one-fifth to one-tenth of what it may cost out of India. The main reason that can be attributed to this is that the demand for these developers is not very high and this is the reason why they charge far less. Developers in India are more skilled than their Western counterparts.

Factors that will impact the price of mobile app development:

There will be various factors that will affect the cost of mobile app development. It is because the cost for the user programming of an app will depend on several features. It is significant to gain clarity about the target audience, application scenarios, functioning, interface design, security, performance, and integration among others. The range of functions and costs of the app will be determined by user stories, target audiences, and user experience. Meanwhile, you should have good clarity about:

Meanwhile, the mobile app strategy has also emerged as a vital factor in assessing the cost of mobile app development.

How will you be monetizing your app? 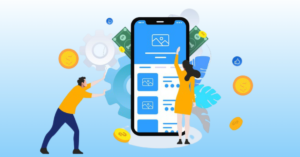 Free apps: The key consideration behind a free app is not to mint plenty of money instantly. The main goal is to expand your consumer base so that you can sell them at a later point in time. You will also be able to monetize a free app by permitting advertisers at it.

Freemium apps: The app is free to use and provides the alternative to users to unlock premium features by shelling out a particular sum. It has emerged as a stunning model if you got a good app. And, if your app is quite beneficial, you will gain the trust of users that may lead them to purchase premium features. If users are not willing to buy premium features and there is a lack of engagement, it indicates that something is amiss that requires attention.

E-commerce apps: When you create this app, it will permit customers to purchase their desired products. It is worth mentioning that e-commerce businesses with mobile apps attract higher income than organizations without any mobile app. It is because their customer can buy anything of their choice at any point in time from any location.

Paid apps: These apps require customers to make payments to enjoy all the features immediately.

There are three types of apps available that can be described as native apps, web apps, and hybrid apps. Here are the crucial details about all these apps: 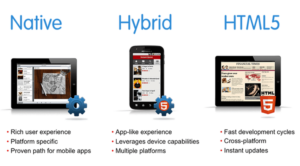 Native apps: These apps are established for an individual platform. They can also be termed as native Android apps or native iOS apps as they mainly function on Operating Systems. The features and functionalities of native apps are set unchangeable. The codes will not be reused. Therefore, the huge efforts required in maintaining the codebases enhance the cost.  The cost of creating a native app is around $100,000.

Web apps: A whopping 80 percent of individuals depend on web apps instead of websites. Web apps have the potential of boosting their experience on internet activities. These apps can be easily accessed through web browsers and can work functions in the devices the user involved with. When compared with native apps, these apps do not face any hassle of customization under the platform or OS. A similar feature helps in bringing down the development costs. The cost of establishing these apps remains $500 to $5000 approximately. 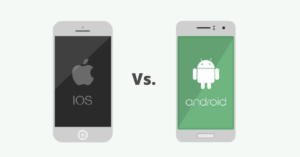 It is not difficult to begin developing apps for iOS as they make more earning and the cost of mobile app development is lesser. In case your organization happens to be a start-up with limited capital, iOS will be the perfect place, to begin with. It is not only economical but iOS also introduces influencers and PR with it. Chances are that you will receive increased clicks for your app established on iOS. This is the reason why iOS development has emerged superior to Android.

However, if your target audience comes from emerging markets, it will be ideal, to begin with, Android as they tend to visit app stores more frequently.

Revenue: You must be aware that Apple users tend to spend more money on app purchases when compared with Android users.

Number of Devices: iOS can power only Apple devices. Consequently, your app will fit limited screens and devices numbers.

App release: The App Store has very stern review guidelines. It implies that the App Store might decline your app on the grounds of security issues or inadequate valuable content or even poor performance.

Flexibility: iOS apps are quite tricky to customize as the platform has several restrictions in place.

Open system:Android developers can get access to far more features.

Release: Android apps are quite convenient to publish on Google Play and the entire process may take just some hours.

Expensive: The more time spent in the stage of development and testing, the higher will be the price of the Android app. However, it still depends on the app’s complexity and features.

Testing: As Android versions and devices may differ, it may take increased time for QA specialists to test your app.

Outsourcing or In-house development of a mobile app:

Outsourcing the process of mobile app development has witnessed a sharp surge in the last few years. The main factor that can be attributed to this trend is the huge decline in outsourcing app development costs.

When you outsource your mobile app development, you can get a superior app without spending much time and money. Meanwhile, the main advantage of creating a mobile app in-house will be you can allocate adequate time and money. The in-house team will have better access and insight into your company’s emerging goals, target customers, and market competition.

Presently, organizations are facing cut-throat competition and they seek to gain a competitive edge. The decision of in-house or outsourcing the mobile app development will depend on several factors that will include time to market cost, and your readiness to take risks. Your decision to create a mobile app in-house or via collaboration will depend on the long-term strategy of the organization and access to revenue, among others.

We may conclude here that creating an app is a bright idea with a huge potential for monetization. If you desire to grab the benefits of app development, you may consider outsourcing where development is not very expensive and where it takes less time to make a mobile app. App development is an amazing opportunity to capture new parts of markets and mint more money.

The Complete Guide to Mobile App Development Frameworks for 2020

Have you ever imagined what does it take to tempt someone to hit the play store for a particular set of applications for his or her precious cellphone?  In the era where the userbase of...

END_OF_DOCUMENT_TOKEN_TO_BE_REPLACED

This site uses Akismet to reduce spam. Learn how your comment data is processed.